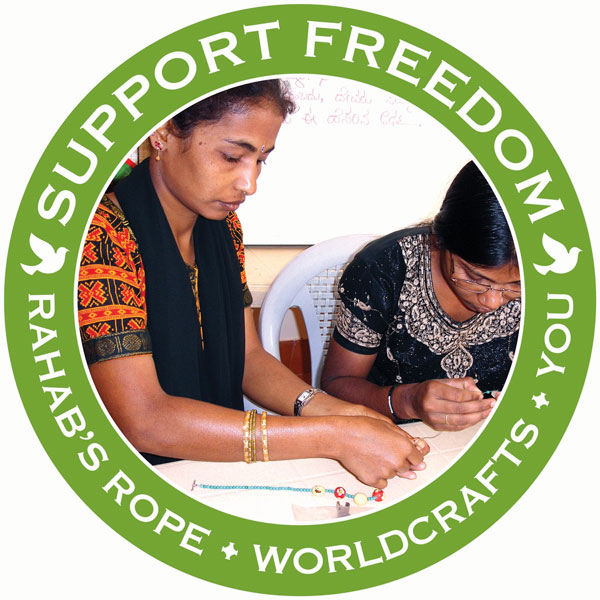 Transformed by Love in Action

Mary was raised in an orphanage in India. When the time came for her to leave the orphanage, a man approached her and offered to marry her, which is not uncommon. After signing some paperwork that she thought legalized their marriage, her new “husband” took her to a brothel and left her. She eventually escaped and then tried to commit suicide multiple times. In her final attempt she ate glass and lay down in the street to die.

And that’s when her life began to change. A worker from Rahab’s Rope Women’s Center found her and brought her to the shelter. There she received safe, loving care and spiritual, educational, and vocational training. Now several years later, Mary enjoys a new life making handcrafted gifts in the nurturing environment of Rahab’s Rope.

Then there’s Sonu. She was married at the age of 15. Her husband later became ill and could not work. He beat Sonu and prostituted her to other men to make money. She had a little girl, who died at five days old. She then ran away from her husband to escape the abuse and ended up at Rahab’s Rope. She has learned to make jewelry and is now one of the most skilled artisans there, capable of training other girls as they arrive off the streets.

Since its start in 2004, Rahab’s Rope has worked with thousands of women like Mary and Sonu on the streets of Bangalore, India. With compassion, women are rescued and provided food, shelter, protection, and trained for a better way of life. The staff’s vision is simple: To see lives transformed by His love in action, revealing that love in a way the women can see, understand, and respond to in faith.

But the need is still great and grows daily. About 200 girls and women are forced into the commercial sex trade every day across India. They are abused for a time and then thrown into the streets to survive if they can. Rahab’s Rope center can house up to 30 women and hundreds receive vocational training on-site each year. The center takes a truly holistic and restorative approach that produces long term change. As the women’s physical, spiritual, and educational needs are met, they are prepared to reintegrate into society as contributing members. Rangeetha is one of many success stories—she now has her own successful sewing business and employs other women.

Just as in the Bible Rahab’s scarlet rope represented her rescue, physically and spiritually, Rahab’s Rope Women’s Center is a lifeline to women who have nowhere else to turn.

Support the women of Rahab's Rope by purchasing their handmade products.