The WorldCrafts Support Freedom campaign actively empowers our customers, buyers, and artisans by supporting those groups working to free women involved in or at risk of human trafficking and sexual exploitation.

WorldCrafts makes a difference . . . for victims of modern-day slavery. Each year, by force, fraud, or coercion, millions of people find themselves trapped in bonded labor and sexual exploitation. WorldCrafts artisan groups work to end these evils by providing sustainable income to people in poverty. When earning a living wage, parents are less likely to be seduced by a sex trafficker’s poisoned promises regarding their daughter’s future. And young women hoping for better lives are less likely to fall prey to criminals seeking to use and abuse the most vulnerable.

Birungi is a young widow in Uganda. When her husband died, her in-laws forced her and her children to leave the land her husband had owned. Deprived of her meager belongings, Birungi was unable to find the means to provide basic necessities for her children, so she resorted to prostitution. Thanks to income from her jewelry making, Birungi can now meet the needs of her family without selling herself. And she’s not alone. There are many others who used to be sexually exploited but today sing songs of praise and thanksgiving as they work together through the local ministry of Proverbs 31 Women. 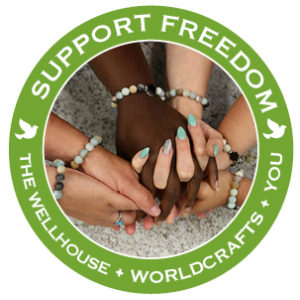 Residents at The WellHouse, a residential living facility for human trafficking survivors just outside Birmingham, Alabama, make unique jewelry pieces.  WorldCrafts orders give residents the opportunity to practice viable job skills such as punctuality, customer service, and meeting deadlines. Further, their self-esteem is greatly enhanced when they see the value of their work.

One artisan employed at More Than Sparrows in Rwanda had to sell her body to make ends meet prior to joining the artisan group. Now she has learned many skills, and her monthly salary is able to provide rent, food, and schooling for her two children while maintaining her dignity. Each WorldCrafts order gives her a special bonus.

Thank you for your support of WorldCrafts artisans around the world.